When you’re an entrepreneur, there’s a strange phenomenon that occurs: the more you look eager to sell your business, the less likely you are to get an offer. We recently analyzed some 9,779 businesses that have used our tool over at www.SellabilityScore.com, and we discovered that the longer you say you want to hang on to your business, the more likely you are to get an offer. 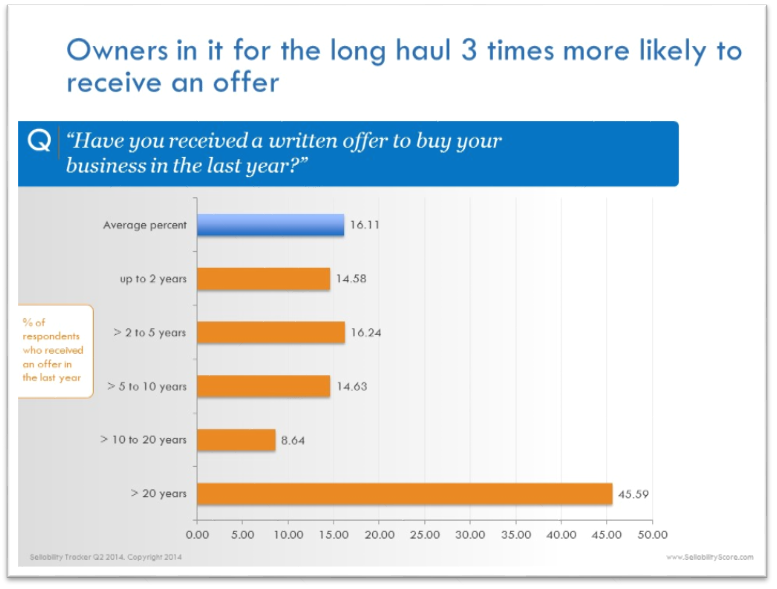 It’s a common paradox for the sale of just about anything that the more eager you are to sell it, the less attractive it will be to the buyer.  Think about your day-to-day life. When you hear that a show you want to see is sold out, what happens to your desire to get a ticket?

Imagine you’re at a party and you see someone attractive, but no matter how hard you try, you can’t make eye contact. Do you move on or does their apparent aloofness heighten your desire to make a connection?

It’s natural for your business to be more desirable the less you appear to want to sell it, but what do you do if you’re keen to get an offer but don’t want to appear desperate? Here are three suggestions for getting an offer without asking for one:

Grab a Seat on the Board

Unpaid board work may sound like boring bureaucracy; all those consensus-building meetings can seem like a time suck for a hard-charging business owner. But being an active member of your industry association board will bring you and your company to the attention of the acquirers in your industry without you having to say you’re for sale.

Strut Your Stuff on Stage

Industry awards ceremonies can seem like self-congratulatory nonsense. After all, nobody outside your industry cares that you’ve won the widget maker of the year award three years in a row – except, of course, the bigger companies in your field who will watch with interest (and perhaps a modicum of envy) as you strut across the stage to accept your award.

In short, looking desperate to sell is a surefire way to minimize your appeal to a buyer. Instead, become an industry star and acquirers will find you all on their own.

Frank Mancieri helps business owners increase their company value by focusing on business value drivers, helping to increase profits, better manage and increase cash flow, mitigate risk, and when appropriate, plan for their future exit. Frank is Chief Growth Advisor with GT Growth & Transition Strategies, LLC. He uses his 20+ years in private business, his 14+ years as a business advisor, and his knowledge and experience to help business owners use their companies to achieve their personal goals. He has received advance training as a Certified Business Exit Consultant®, holds a Bachelor’s Degree in Business Administration and an MBA, both from Bryant University, and he is an adjunct professor at Rhode Island College.